Defence Sector of India has experienced a vast Growth in past 5 years. India has the third largest armed forces in the world which also reflects in its budget – ranked fourth after US, China and UK. This year, the government proposed a total budget allocation of INR 2,74,114 crores for FY 2018 which was up 6.2% from INR 2,58,589 crores allocated last year. Despite the increase in allocation, the growth of capital expenditure for the year stood at 0.3% as a significant share of the pool went towards funding revenue expenses that have grown 8.83% from previous year. The table below highlights how the defence budget is broken into sub-categories and how these numbers have changed over the years.

A major share of defence related capital requirements are met by imports and has been a key area of interest for the government to work on import substitution by bringing world-class technology to India and making it locally.  Favourable government policies and frameworks for local manufacturing have taken shape over the years with foreign companies getting into strategic collaborations with Indian manufacturers.

3. Procedures for the Grant of Industrial Licenses have been streamlined:

According to a leading newspaper, the government seeks to make India self-reliance by indigenization and technology upgradation in partnership with foreign companies. 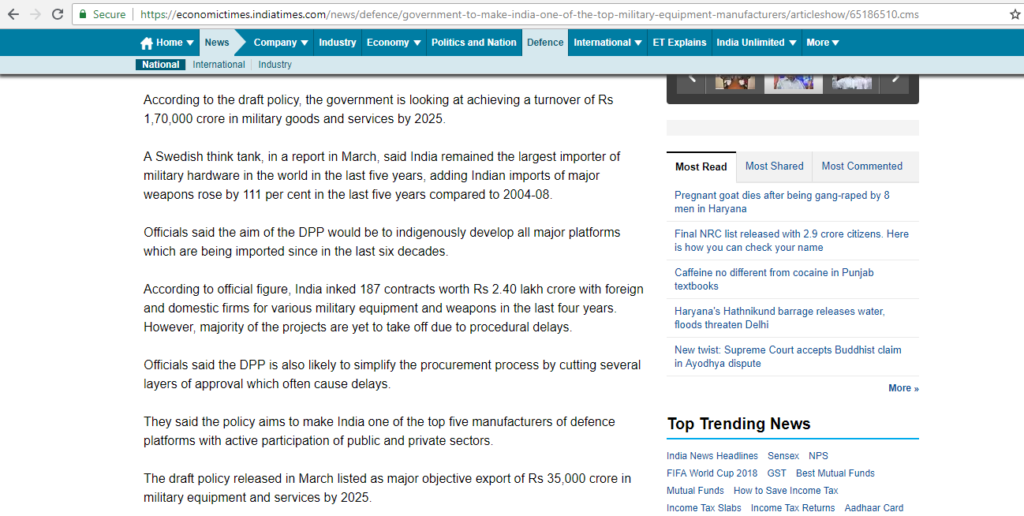 The government identified 12 military platforms and weapons systems for production in India to achieve the aim of “self-reliance”.

Despite efforts on making defense equipment available in India with International collaborations and support, we still lag behind significantly due to shortage and delays in acquisition of weapons as sited in a news report published by Economic Times. The army needs basic items like assault rifles as well as high-end anti-aircraft missile systems. There are enormous delays in the acquisition processes for these. There’s also a concern about ammunition supplies. Army insiders said at the current levels of supply, India can sustain an all-fronts war for just four days. New orders have been issued and India should be in a far better position, they said.

Interestingly, six of the top 10 largest arms importers in the period 2011-15 are in Asia and Oceania.

“A major reason for the high level of imports is that India’s arms industry has so far largely failed to produce competitive indigenously-designed weapons,” it claimed.

The 10 largest importers of major arms and their main suppliers, 2013–17

Note: Percentage of total is rounded to 1 decimal place (except for percentages over 10 which are rounded to whole numbers).