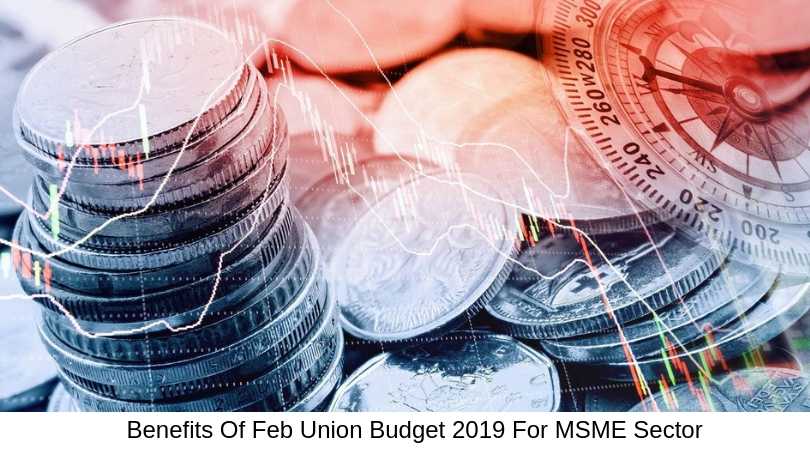 The Micro, Small and Medium Enterprise sector has always formed an important part of Indian Economy. This sector is also known for its innovations, technological advancements and providing jobs to many people. The Union Budget 2019, was presented by Piyush Goyal, India’s Finance Minister in February. This year’s Union budget offers lots of advantages to MSMEs. Business can achieve new heights of success by making optimum utilization of the benefits Of Feb Union Budget 2019 For MSME Sector. The budget shows that the government has a clear aim of strengthening the backbone of the Indian economy, i.e., the MSME sector.

The most important change brought in the MSME sector is in the field of the tax rebate. Earlier the limit for individual taxpayers used to be 2.5 lakhs. In 2019 budget, this limit has increased to 5 lakhs. Individual with annual an annual income of 6.5 lakhs can also take benefit of this limit provided they make investments in provident funds, etc.

Under tax rebate benefits, the government has made positive changes in terms of interest earned on funds deposited with posit office or banks. The limit has increased from 10,000 to 40,000.

Another important benefit that the MSME business can use to expand their business is the launch of ‘instant loan scheme’. As per this, the MSME can get a loan up to one crore within 59 minutes. This would be highly beneficial for MSME startups. A further rebate of 2% on the interest of loan amount would be given to MSME’s who have GS-registration.

The exemption limit of Capital Gain Tax has been increased to the amount of 2 crores. Moreover, Piyush Goyal has also made an announcement regarding the second house’s notional rent. He said that as per new budget the notional rent in such case would be tax-free. He also announced that emphasis would be given on promoting local businesses. For this, all the public sector enterprises would be covered by GEM platforms.

Another major advantage of Union Budget 2019 for MSME Sector include the announcement of submission of quarterly returns for business with an annual turnover of less than 5 crores.

Under this Union Budget, the government has announced rebate for the farmers who have become a victim of natural calamities. Such farmers would be given a subversion of 3% on the interest of loan taken by them.

Besides the above-mentioned benefits of Feb Union Budget 2019 For MSME Sector, Finance Minister Piyush Goyal has also announced that for any government project, 25% of sourcing would be done from MSMEs. It is also announced that out of this 25%, 3% would be procured from women entrepreneurs.