Agricultural Sector of India has made a lot of progress since independence in terms of growth in output, yields and area under many crops. It has gone through a green revolution, a white revolution, a yellow revolution and a blue revolution.

Agriculture sector continues to be the mainstay of the Indian economy. Agriculture is the only means of living for almost two-thirds of the employed class in India. India depends heavily on the agriculture sector, especially on the food production unit after the 1960 crisis in food sector. Since then, India has put a lot of effort to be self-sufficient in the food production and this endeavor of India has led to the Green Revolution. As agriculture has backward and forward linkages with other economic sectors, changes in agricultural performance have a multiplier effect on the entire economy.

India has made a lot of progress in agriculture since independence in terms of growth in output, yields and area under many crops. It has gone through a green revolution, a white revolution, a yellow revolution and a blue revolution. India has been the world’s largest producer of milk for the last two decades and contributes 19 per cent of the world’s total milk production.

India is emerging as the export hub of instant coffee which has led to exports of coffee increase 17 per cent in calendar year 2017 to reach US$ 958.80 million. Tea exports from India reached a 36 year high of 240.68 million kgs in CY 2017. 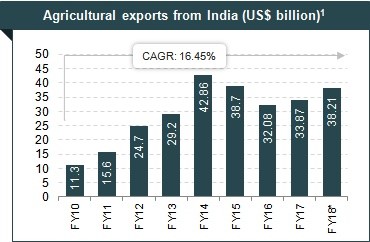 Agricultural export constitutes 10 per cent of the country’s exports and is the fourth-largest exported principal commodity. Agricultural exports from India reached US$ 28.09 billion during April 2017-January 2018 with exports of basmati, buffalo meat reaching US$ 6.19 billion and US$ 6.59 billion, respectively. (Source : IBEF, CSO, Ministry of Commerce).

Investment is one of the crucial factors determining the growth rate of agricultural sector. The government plays a very significant role in boosting agricultural growth through its increased investment in this field as also inducing the private investment in agriculture.

According to the Department of Industrial Policy and Promotion (DIPP), the Indian agricultural services and agricultural machinery sectors have cumulatively attracted Foreign Direct Investment (FDI) equity inflow of about US$ 2.02 billion and US$ 466.31 million, respectively, during April 2000 to December 2017. The food processing sector attracted FDI of US$ 8.37 billion in the same period.

Due to intensive involvement of labour in different farm operations, the cost of production of many crops is quite high. Human power availability in agriculture also increased from about 0.043KW/ ha in 1960-61 to about 0.077 KW/ ha in 2014-15. However, as compared to tractor growth, increase in human power in agriculture is quite slow.

There is a need to innovate custom service or a rental model by institutionalisation for high cost farm machinery such as combine harvester, sugarcane harvester, potato combine, paddy transplanter, laser guided land leveller, rotavator etc. to reduce the cost of operation and it can be adopted by private players or state or central organisation in major production hubs.

According to the World Bank estimates, half of the Indian population would be urban by the year 2050. It is estimated that percentage of agricultural workers in total work force would drop to 25.7 per cent by 2050 from 58.2 per cent in 2001. Thus, there is a need to enhance the level of farm mechanization in the country.

India has the capacity to produce the food grains which can make vast difference in Indian Economy. To achieve targeted mark by the government it needs to provide support in case of land, bank loans and other machinery to the small farmers along with the big farmers with this we can expect some improvement in Indian economy.

Irrigation is the most important agricultural input in a tropical monsoon country like India where rainfall is uncertain, unreliable and erratic India cannot achieve sustained progress in agriculture unless and until more than half of the cropped area is brought under assured irrigation.

Economic Survey indicated that the government was keen on doubling farmers’ income by 2022, for which it has launched several new initiatives that encompass activities from seed to marketing.
Credit from institutional sources will complement all such government initiatives like Soil Health Card, Input Management, Per Drop More Crop in Pradhan Mantri Krishi Sinchai Yojana (PMKSY), PMFBY, e-Nam, etc, the survey said.
The Economic Survey has pointed that flagship project Jalyukta Shivar has yielded positive results and would be continued to make the remaining 6,000 villages out of a total 25,000 drought-free by 2019. In 2016-17, 5,291 villages were made water neutral with 1.51 lakh works with expenditure of Rs 2,235 crore. Whereas, the first phase of farm ponds with target of 1,12,311 has seen completion of 60,496 farm ponds.

With small and marginal farmers accounting for 78 per cent of the total 1.36 crore farmers, the state government has decided to extend the group farming projects across 40,913 villages. A group of 20 farmers with cumulative land holding not exceeding 100 acres would be provided subsidies up to Rs 1 crore for group farming.

According to the World Bank estimates, half of the Indian population would be urban by the year 2050. It is estimated that percentage of agricultural workers in total work force would drop to 25.7 per cent by 2050 from 58.2 per cent in 2001. Thus, there is a need to enhance the level of farm mechanisation in the country.

1 thought on “Agricultural Sector of India”